As of 2Q18, Vietnam’s economy witnessed a strong growth, with a GDP growth of 7.08%, the highest level of six-month growth since 2011, of which 7.45% for the first quarter and 6.08% for first-haft 2018. According to the General Statistics Office, this result reflected the improvement of almost all economic sectors. It is predicted that the growth rate in the last-half 2018 will be lower. However, if the existing capacities and potentials are fully utilised, it will be possible to reach the target of 6.7% in 2018.

Vietnam’s FDI continues to hit a new record. By June 2018, the total FDI pledged to the country was nearly USD 20.33 billion, increased 5.7% over the same period in 2017. The FDI disbursement recorded USD 8.37 billion, an increase of 8.4% YOY. In terms of investors, Japan took the lead to pour in USD 6.47 billion and achieved 31.8% of the FDI, Korea came next with USD 5.08 billion and Singapore with USD 2.39 billion. The notable projects comprise the Smart City with total investments of USD 4,138 billion in Hanoi by Japanese investor, the polypropylene manufacture plant project invested by Hyosung Corporation (Korea) with total capital of USD 1,201 billion in Ba Ria-Vung Tau, the additional investment of USD 1.12 billion in Laguna (Vietnam) Co., Ltd. by Singapore investor in Thua Thien Hue. 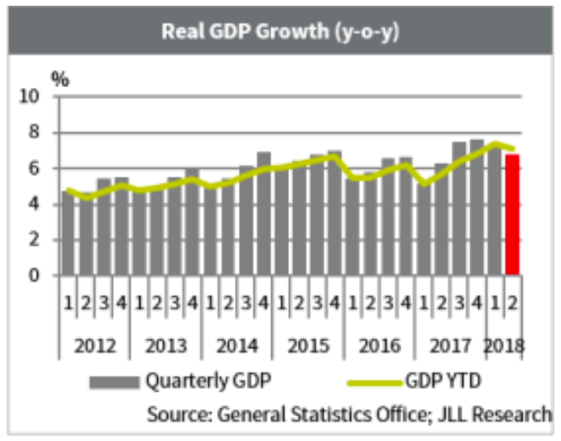 Retail turnover and international arrivals uprising. The total retail sales of consumer goods and services recorded in 2Q18 reached the peak of 10.7% as compared with the same period last year. According to the Vietnam National Administration of Tourism, the number of international tourist arrivals in 2Q18 totalled over 7.8 million visitors, an increase of 27.2% QOQ. In particular, China and South Korea were still the largest sources of visitors, with a total of more than 3.2 million arrivals.

During the last quarter, the total supply of shopping centres stood at approximately 962,000 sqm. The overall market rent was at around USD47 per sqm per month, growing slightly by 0.1% QOQ and 3.6% YOY. Thanks to the change in shopping behaviour and developers’ optimistic expectation on the city’s growing purchasing power, convenience store and supermarket to expand with approximately 130,000 sqm and 3,000 sqm of new sectors continued supply entering to the market, respectively. Under the pressure from emerging of e-commerce and more foreign retailers entering to the market, new supply in the future is projected to be developed as an entertainment, showroom and lifestyle destination for all generations of customers rather than purely physical shopping places.

The official new launches in HCMC totalled 6,947 units, down 18.89% QOQ and 49.1% YOY, the market also recorded a notable number of 6,000 units under soft launches in 2Q18. The total sales reached 7,374 units, down 9.4% YOY, in line with the narrowing new supply. Of that, 70% came from an affordable segment. Prices were higher QOQ across all markets, with the Affordable segment registering the most considerable growth, of 2.6%. According to JLL, the Investment sentiment in the high-end market should be lower owing to pressure from the abundant supply then owner-occupied and investors mostly focus on mid-end and affordable segment.

As of 2Q18 end, the total stock of HCMC office market slightly increased by approximately 3,500 sqm to reach 1,945,000 sqm. The overall occupancy rate stood at the high level of above 95%. Of that, Grade A and Grade B occupancy rates strongly increased on the back of high demand in the market. In addition, rent also rises notably; specifically, Grade B sub-segment recorded a strong increase of 3.1% QOQ in average rent thanks to the ongoing strong demand on the market. A large volume of high-quality Grade B supply is also projected to complete by 2020 and will likely put pressure on Grade A sub-market in the future, especially long-standing Grade A projects with the degenerated construction quality.

The Southern industrial supply in end of June 2018 was highly increased compared to that in 4Q17, with a total leasable land area of about 37,030 ha. Most of the new supply came from Ba Ria-Vung Tau, Tay Ninh and Binh Phuoc provinces, the less established areas in the region. The average occupancy rate was 77% as at 2Q18, an increase of 2% compared with 4Q17, mostly contributed by Binh Duong and Dong Nai. Moreover, rents rise steadily as of 2Q18, the average land rent in the Southern Key Economic Zone recorded at USD72 per sqm per lease term, reflecting an increase of 4.7% compared to 4Q17. More than 11,940 ha of supply in industrial land is expected to enter the Southern market over the next three years, of which extended phases of existing projects contribute the large proportion. JLL forecasts the occupancy and rental growth rates to hit a new level as stronger occupier demands and positive economic development.

Stephen Wyatt, General Director of JLL Vietnam, comments: “The Vietnamese property market has seen 27 years of development with various ups and downs. The market is developing and maturing at a faster rate than previously seen. Developers, investors, banks and government authorities are more alert to market dynamics and prudent in their actions and roles. JLL believe in strong parameters and development of the property market in the future, and 2018, in particular, will remain a year of promising prospect despite global challenges.”